Own a Cafe? Integrate the Coffee Catcher Without Changing Workflow..

I (Nate) had the opportunity to attend the Barista Round Table on cup brewing today, led by Sarah Dooley and Jared Mockli. The session included a free experimentation time, and I took the chance to brew a few French presses of delicious Kenya coffee from Water Ave.

I also got the opportunity to clean a press with a Coffee Catcher using Visions' faucet and rinse basket, which is very similar to cafe cleaning setups I've observed around Seattle. It turns out that the water jet from the open faucet did a great job pushing all the fines and grit that had been trapped under the Catcher back out of the press in the rinse water. The result was a sparkling clean carafe - even under the Coffee Catcher (see pictures below).

I think this discovery has significant implications from a production perspective. Now, it seems, the Coffee Catcher can perform a filtering function without being removed from the press from brew to brew. This makes the Coffee Catcher very easy to integrate into traditional cafe workflows. It seems to me like a cafe can brew with the Coffee Catcher exactly as normal, but serve a cleaner cup to customers.

For the record, here are pictures of a Coffee Catcher after brewing and rinsing and swishing just as normal with the press. This was three rinses. 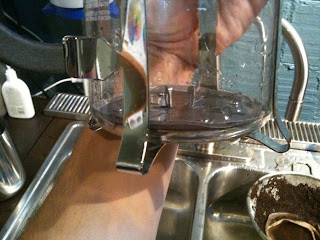 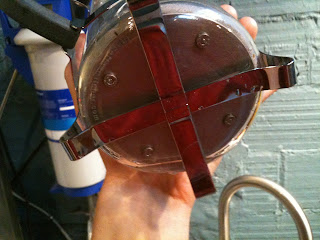 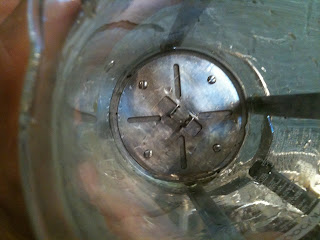 Top View
Of course, most home users do not use filter baskets in their sinks, and so I expect most home coffee lovers will continue to find that hooking the Coffee Catcher is the easiest way for them to remove grounds from the press. That said, this discovery does allow those who do swish out their coffee to continue to do so while enjoying a cleaner tasting cup.

Returning to the cafe, there are plenty of other ways to integrate the Coffee Catcher into the production environment. I've been thinking a lot about different ways to add unique value to the customer in terms of menu items that go beyond a commodity ("cup of drip") to a value-added experience for the customer. A lot of new drinks territory to explore here, I think.
Posted by Kaffeologie's Notes at 12:48 AM 1 comment:

Part 1 of the series is here.

Success! I (Nate) visited Seattle Coffee Works on Thursday to start testing out my multi-bed brewing hypotheses. Owner Sebastian was gracious enough to give me the run of his slow bar for an hour and that gave me a chance to select a particular combination of beans and start tweaking brew variables with that given combination.

For this experiment, I selected 6 grams of the Colombia Huila Monserrate and 22 grams of the Tanzania Blackburn Estate. I brewed with water at about 205, and water dose varied between 453 and 478 grams. My target water dose was 454, and I got better at judging water cut-off times over the course of the experiment. Coffee was ground in Sebastian's Bunn Grindmaster. The press pot was a 32 oz polycarbonate. No one at SCW had tried these coffees together before.

Tasting notes: LOVED it! The coffee just sparkled. There was black pepper, a little nutmeg, hints of blackberries. Just a delicious combination. Sebastian and I thought it was the best of the three. Others thought that a slightly longer extraction might have brought out more of the flavor profiles of the coffees. Pulling the 22 g at 2:45 may have been a trifle early.

Brew 2 - Both coffees mixed and placed on one Coffee Catcher. Brewed to till about 2:45, shaken and pressed at about 3:45.

Tasting notes: There was much less brightness in this brew. The coffees felt very thoroughly blended. The high notes of each one were just muffled. Very smooth. I felt like the unique properties of each coffee got a bit lost in this blend, but some of the tasters that felt there was some under-extraction before thought there was progress in terms of extraction. Certainly the full dose was kept in the brewing chamber for the full 4 minutes.

Brew 3 - Back to two Coffee Catchers, with Tanzania on top again. This time the grind setting for the Colombia was adjusted to a finer setting.

Tasting notes: This was just a bad idea, and I was worried about it when I was grinding. Grind setting adjustment has potential, but it doesn't make sense to fine up the bottom dose, which will be in the press longer anyways. Next time, I might fine up the top dose instead. The result was noticeable over-extraction. Still some signs of life underneath, but not deliciously sweet and drinkable like Brew 1.

My conclusion: this is a REALLY cool way to brew in the press, and I want to try those coffees - and others - soon. Brew 2 and Brew 1 were significantly different, and my conclusion is that the physical separation of the second Coffee Catcher disc produces semi-layered brewing, as I had predicted. What other great coffees should be combined?
Posted by Kaffeologie's Notes at 11:05 PM No comments:

This post is really a question, with some initial answers coming soon. After getting the idea from Josh of Seattle Coffee Works, I've been thinking about the possibilities of brewing multiple coffees simultaneously in a single press.

It's always been possible to mix beans or grinds from different coffees and throw them in the press. The Coffee Catcher may make it possible to layer and adjust that brewing process to bring out the best in both coffees. Blending is not tried often, and for good reason. There are many ways that this could go horribly wrong from a flavor perspective. That said, the possibilities of brew layering are fascinating, including tweaking temperature profiles down the press, incorporating a pour over effect involving multiple coffees, adjusting grind size for different brewing conditions, and even adjusting brew times separately.

I don't know if this would work. I'm still looking for a pair of interesting coffees that I want to combine in the press using two Coffee Catchers. Any suggestions?

Bonus Question: What would we taste if the separate components of an espresso blend were brewed this way?
Posted by Kaffeologie's Notes at 1:26 PM No comments:

Since Seattle's mini heatwave of last week, I (Nate) have been musing on various delicious ways to consume cold coffee.

I like that Daniel's method allows a quick 4 minute iced coffee preparation and allows the coffee to cool quickly without becoming diluted. The strongest part of the blog post, though, is Daniel's description of the volatile organic acids that extracted from the grounds during a hot brew process. These are a subset of the dissolvable flavor compounds referred to in my recent 2 part post on brew colloids and the Coffee Catcher (1 and 2). Organic acids in coffee tend to stand out as flavor highlights on the palate, but are fragile and decompose rapidly. Decomposed acids taste bitter, and this is why Daniel recommends a hot brew followed by very rapid cooling to preserve that fleeting complexity in the cup.

The other major cold brew school is toddy. The moniker comes from toddy equipment maker Toddy Cafe. Making toddy is easy: mix a relatively high dose of coffee (at least double normal, Toddy Cafe recommends a quad dose) with room temperature water and brew for at least 12 hours. Dilute to taste and serve. Because temperatures never approach those needed for organic acid formation, toddy coffee remains smooth and approachable regardless of brew time, although the trade-off is significantly reduced flavor complexity.

Here's my question. Why does a toddy brew require a massive updose? Extraction may be slower, but total extraction of coffee compounds during the cycle seems comparable to a hot brew. Caffeine content is certainly there, as I can attest after a recent cup of Toddy at Aster - and that's after dilution. Ice dilution should be even less of a factor with room temp coffee than with a hot brew, so my intuitive sense would be a dose in the 120% range. If extraction rates and dilution aren't in the picture, what else is going on to justify double to quadruple doses?

I'm a card carrying advocate of the "if it tastes good, it is good" school, so if it just tastes better, that's a good enough reason for me. My question, though, is why? And also, has anyone tried brewing toddy at normal strength for comparison? Comments welcome.
Posted by Kaffeologie's Notes at 2:20 PM 1 comment:

I'd like to start this short week by pointing out an interesting emerging coffee blog on the Seattle scene. Michael Frank, a local SPU student, is making the rounds of Seattle's coffee shops, Disloyalty Card in hand.

I found Michael's writing to be refreshing, upbeat and frank. His reviews go well beyond the annoying "no outlets by my seat!" type and are satisfyingly focused on the coffee served. It's also refreshing to see someone blogging as they go - and as they learn. Reviews up so far include Aster, Trabant, and Fonte. Before Michael discovered the Disloyalty Card, he also covered Bedlam and Roy St.