The Story of Two Inventors...

You may be asking, "who are these guys behind The Coffee Catcher?"  Well, here's a little introduction to John and Nate and the history behind the latest evolution of French Press coffee:


"The story of the Coffee Catcher is one of two friends with a passion for coffee and problem solving, who eventually put their interests together and discovered a business.

"  It began in 2009 in Bangkok, Thailand where John and his wife were living in a great apartment with bad water pressure. Disposing of the grounds from his French Press in the kitchen sink wasn’t possible, so John resorted to dumping his grounds, teaspoon by teaspoon, into the trash. Back in Seattle, Washington, his friend Nate’s solution was quicker and nastier — head for the bathroom and send 'em down the toilet. All of them loved the full bodied punch of french press coffee, but the morning ritual was losing its charm.

"John started dreaming of a better way to clean out his grounds, and sent some initial scribbles to Nate. Nate loved the idea but promptly pooh-poohed John's design. Eight weeks later, after days of sketching and Skype conversations and weeks of managing prototype development in a basement, the Coffee Catcher was born."

Really, we like to think of this whole story as the start of a revolution - a finely-roasted, aromatic, and full-bodied revolution that perks up everyone's French Press ritual.


read more about John and Nate...
Posted by Kaffeologie's Notes at 3:06 PM No comments:

The Press Pot (a.k.a. The French Press) 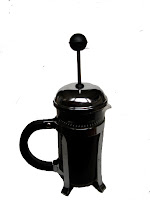 "The ubiquitous press pot. It's everywhere. It's seemingly easy to use, right? Well, yes, but a little understanding of the device, how it works, and maybe a bit about the history of the product will get you using yours better. If you want some of the richest coffee you can get, a press pot can deliver. What may surprise most is that you can also get a relatively clean brew from it as well, if you have the right tools and prep everything correctly...." read more...

Posted by Kaffeologie's Notes at 9:53 AM No comments:

The lineup included 12 coffees, mostly from Indonesia.  The Bali Kintanami was outstanding: a strong floral bouquet that just overwhelmed the senses.  Another favorite was the earthy, spicy Mandheling Rona Bhakti.

Ah, what an excellent way to spend a winter, Seattle day.
Posted by Kaffeologie's Notes at 7:33 PM No comments: 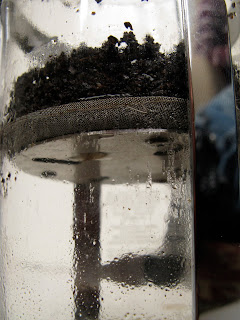 As if the arrival of a smoother French Press experience wasn't exciting enough, now you can pre-order your Coffee Catcher now on the product website.

With such a rich history of coffee excellence, it's a shame that the French Press also has a long history of broken carafes and really ugly coffee-cleanup experiences.  But, that's all changing now, as the stainless steel Coffee Catcher cleans up the experience without altering the exquisite flavor we love.

Posted by Kaffeologie's Notes at 12:09 PM No comments:

We simply can't resist sharing these coffee mentions coming through the Tweet vine:

Posted by Kaffeologie's Notes at 8:22 PM No comments:

late nights + a coffee cupping = a much needed boost 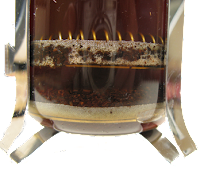 We - Nate and John the Coffee Catcher Chroniclers - were up until 7:00am this morning working on business plan and strategy for a Coffee Catcher proposal tomorrow afternoon.

As John puts it, "We're on space station time."

But, we'll get nicely wired at a coffee cupping this evening, so who knows how we'll sleep tonight...
Posted by Kaffeologie's Notes at 7:06 AM No comments:

In honor of our new Coffee Catcher Twitter Feed, we're posting some of the French Press Tweets seen today:

Hmmmm, The Chroniclers wonder how many of these carafes were broken while removing the coffee grounds...
Posted by Kaffeologie's Notes at 12:10 PM No comments:

We came across the blog, weeklyroast.com, which is written by the CEO of a start-up coffee roasting company.  Naturally, his post, "Why French Press Makes Better Coffee" caught our attention.

In the post he echoes several of the reasons we love the French Press.  Here are some highlights from the many good points he details:


"The french press gives you more control over the brewing process. You get to choose how hot you want the water to be when you pour it in....With french press, you’re in total control over water temperature and its contact with your ground coffee beans.


"Using a french press...essential oils [from the coffee beans]...make it into your cup. After the coarse ground coffee is steeped in hot water, the plunger that is slowly pushed down has a metal mesh small enough to catch most of the coarse coffee grounds, yet big enough to allow the coffee oils to pass through and ultimately make it into your cup.


"Most experts would agree that the french press is one of, if not the best way to taste the subtle differences in roast profiles in coffees from around the world."


In addition, Ken, the coffee CEO goes on to pinpoint the drawbacks of using a French Press:


"A few drawbacks to the french press method are the cleanup involved and the sediment that’s left in the bottom of your cup."


(Both of these problems are solved with the Coffee Catcher...)

We firmly agree with Ken when he says,


"French press coffee may be a bit more work than other brewing styles, but the resulting cup is worth it."

other uses for the Coffee Catcher hook 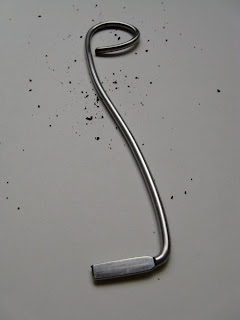 We are having way too much fun testing the Coffee Catcher since the final product sample arrived.  In fact, we've discovered a few additional, handy uses for the Catcher's hook:

Posted by Kaffeologie's Notes at 3:28 PM No comments:

Posted by Kaffeologie's Notes at 9:45 PM No comments: